Joining the BIG 10 Conference in 2014, Rutgers is making major investments to upgrade both their Athletics programs and facilities to compete on the national stage in one of the premier NCAA conferences. Rutgers Gymnastic was in dire need of a new facility. Gymnastics had been relegated to a space at the end of a some basketball courts in a recreational building on campus. In 2018, construction began on the brand new 84 million dollar Athletic Performance Center. This new facility included an 11,000(approx) sqft gym for the gymnastics program.

In early 2019, they hired former Temple Head Coach Umme Salim-Beaslery and her staff. While at Temple, she and her staff rewrote the record books during their three seasons. When Umee was hired as head coach, she immediately contacted US Gym Products for the equipment and installation. Having worked with us at Temple University, she already knew about our unparalleled quality and attention to detail. The facility, having been designed by the former coaching staff, left us with having to fix some design flaws in the completed building.

The original plans called for a 48’x48′ recessed spring floor. This floor shared a 20×18 Resi mat area with the trampoline and balance beam. But the concrete pits for this resi mat, as well as the concrete pit for the spring floor, encroaches into the vault area. This would have pushed one of the vaults off-center with its pit. This is obviously unacceptable and needed to be fixed. So we reduced the spring floor down to a 44×44 floor. Using a wood platform system(fire-rated), we filled in the concrete pit to reduce its size. By reducing the floor by 4′, and filling in the concrete recess. The floor no longer interfered with the vaulting area.

Here you can see an overview of the entire gym. 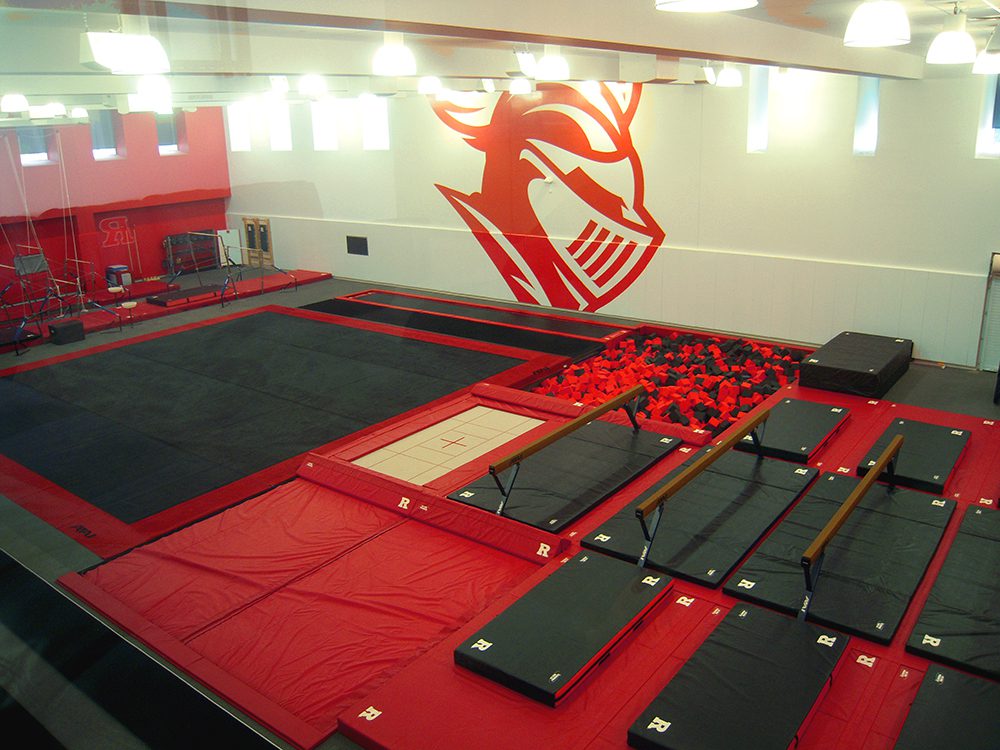 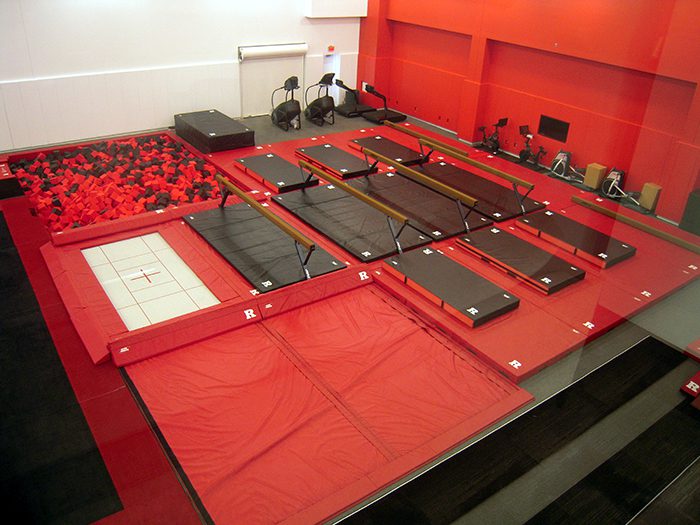 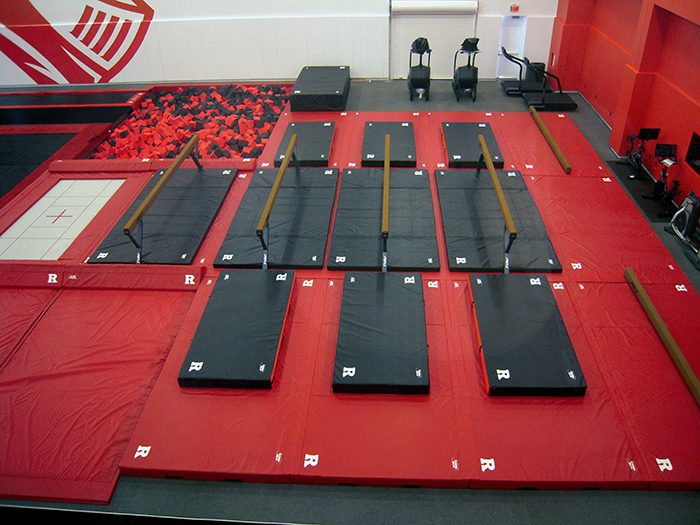 The beam area features (3) beams with hard landings, 1 beam with both a deep foam and resi pit landing area as well as (2) low beams. All beams have 20cm landing mats. 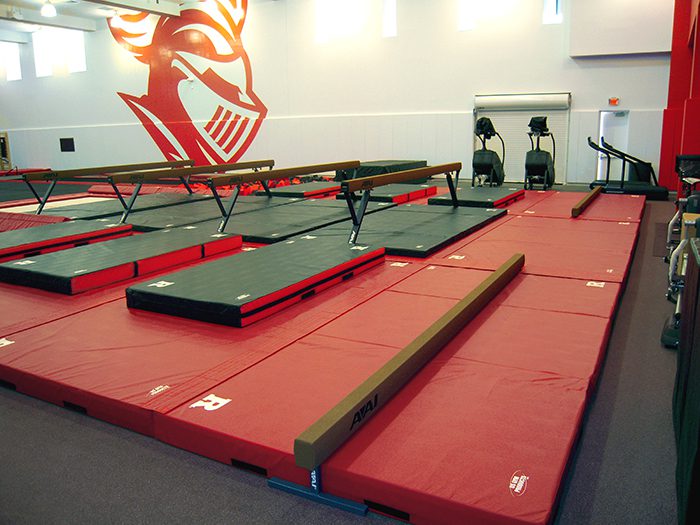 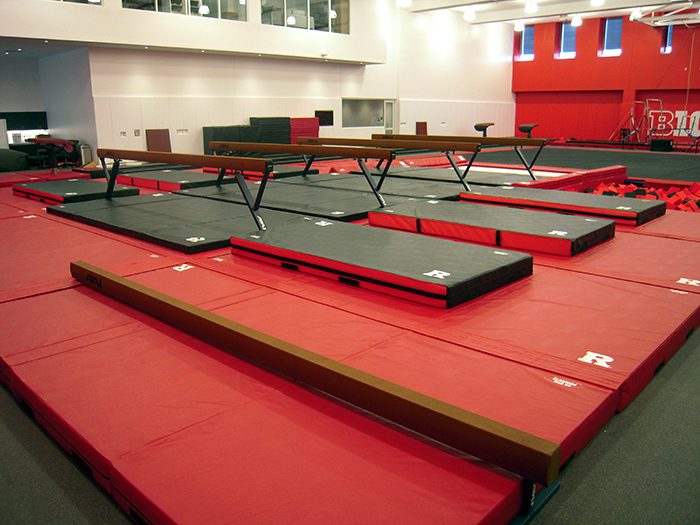 All the mats in the beam area are seamed together with veclro connector strips. making this a very clean and safe training area. 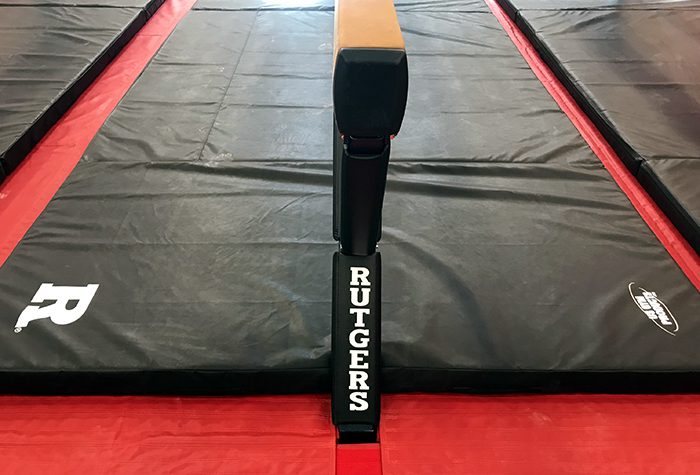 The last feature that was added in to complete the balance beam area was custom leg pads.

You can also see how all the matting are seemed together for maximum safety. Including the Rutgers logos on the mats, make the gym feel like home for the team. 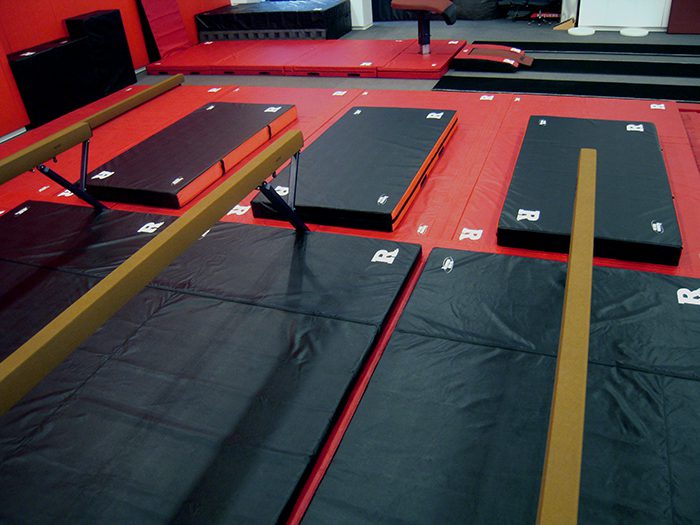 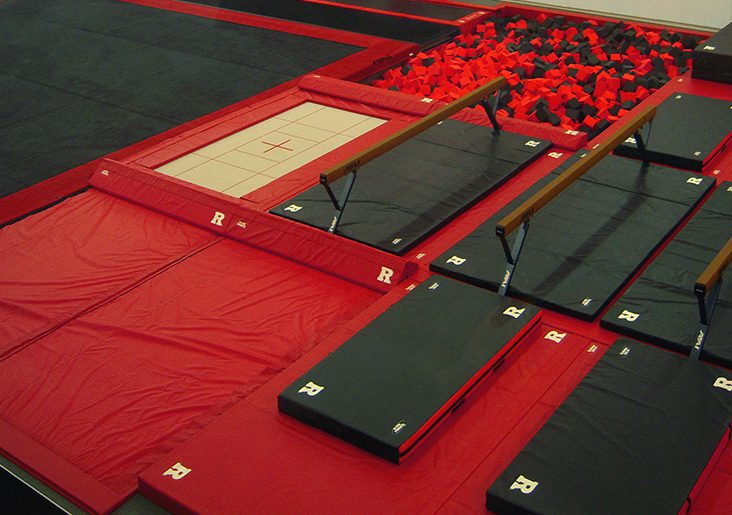 We are particularly proud of this area. We custom designed and installed 8″ thick padding to transition form both the balance beam and trampoline going into the resi and deep foam pits. Additionally, for added safety, we put a sloped border going from the trampoline to the spring floor. 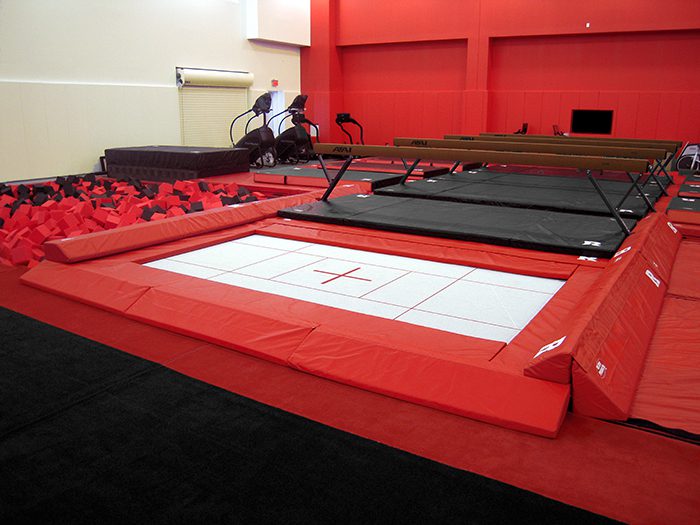 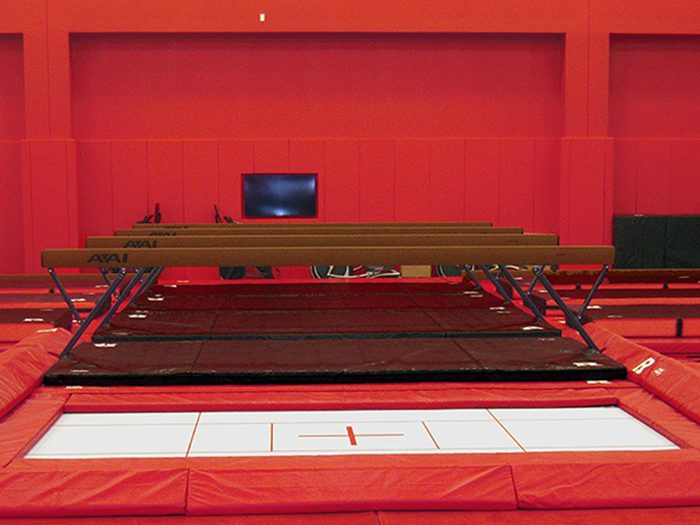 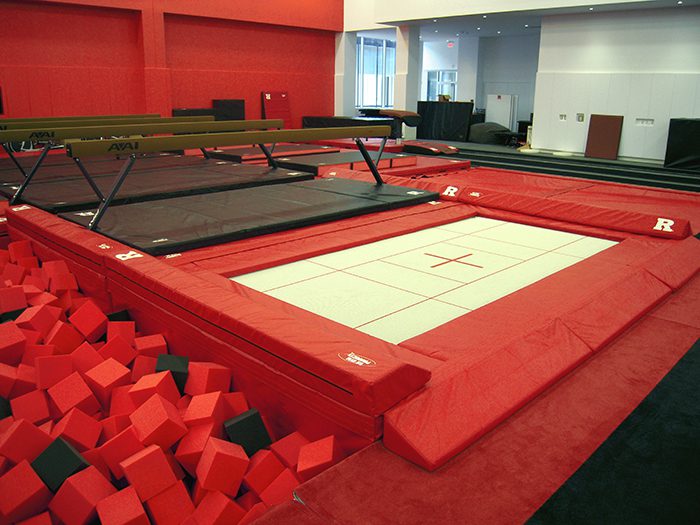 First, we installed the trampoline so the top of the 2″ thick side pads would be flush with the top of the 20cm beam mat. We then connected the beam and tramp pads with a connector strip for cleanliness and safety. 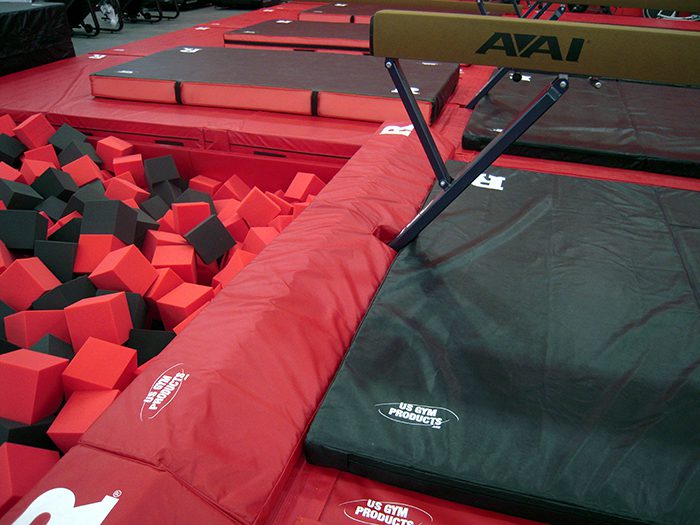 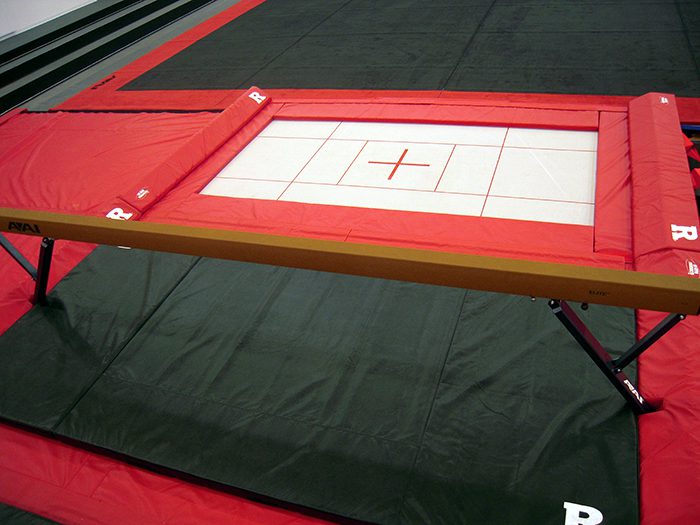 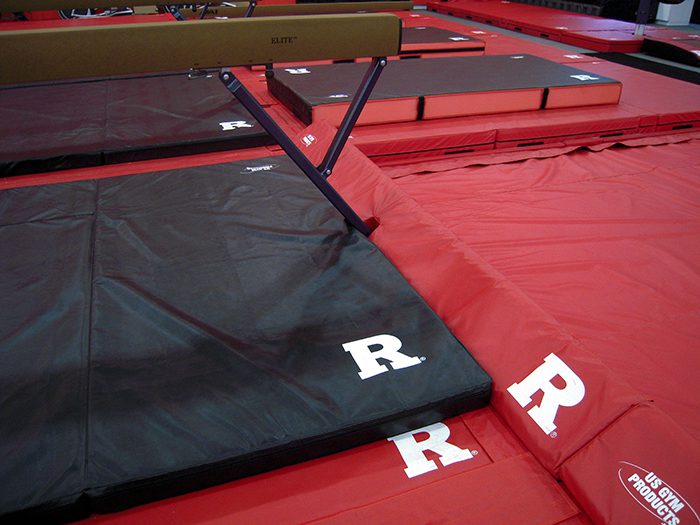 Additionally, we designed the 8″ beveled pads that go into the pit so they would be identical and continuous across both the beam & trampoline ends. 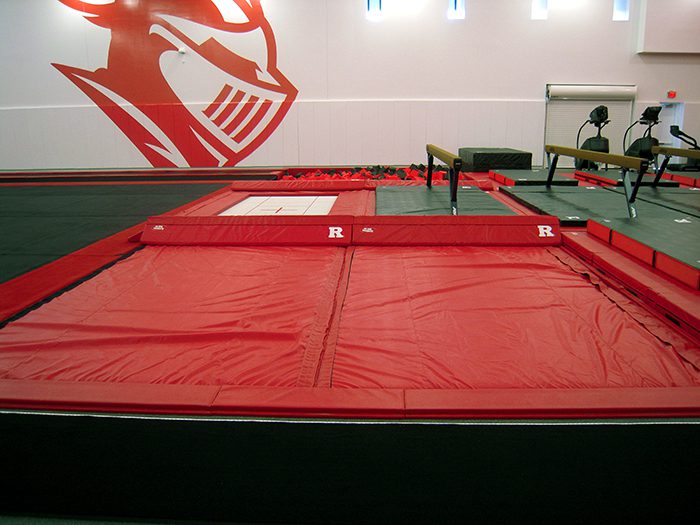 Here you can see where the spring floor, balance beam and trampoline all dismount into the resi mat area. You can also see how close the vault runway is to the pit edge padding. As discussed above, This pit was reduced by 2′ in length(vault runway to tramp/beam). If we had not done this modification. The vault would have been pushed off center of its pit by a foot. Our solution solved this problem while maintaining safety for the beam & trampoline dismount area.

The bar area is pretty straight forward. You have (2) ueneven bars with 20cm hard mats underneath. We includ an uneven bar that dismounts onto a resi mat and a single bar that has a resi mat on one side and a deep foam pit on the other. 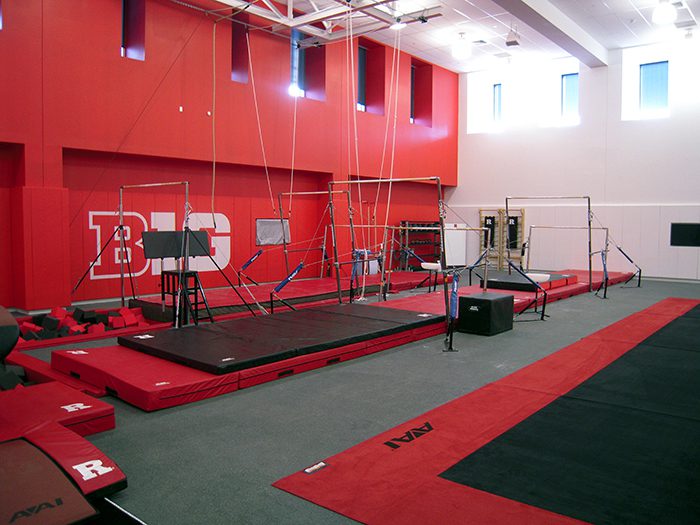 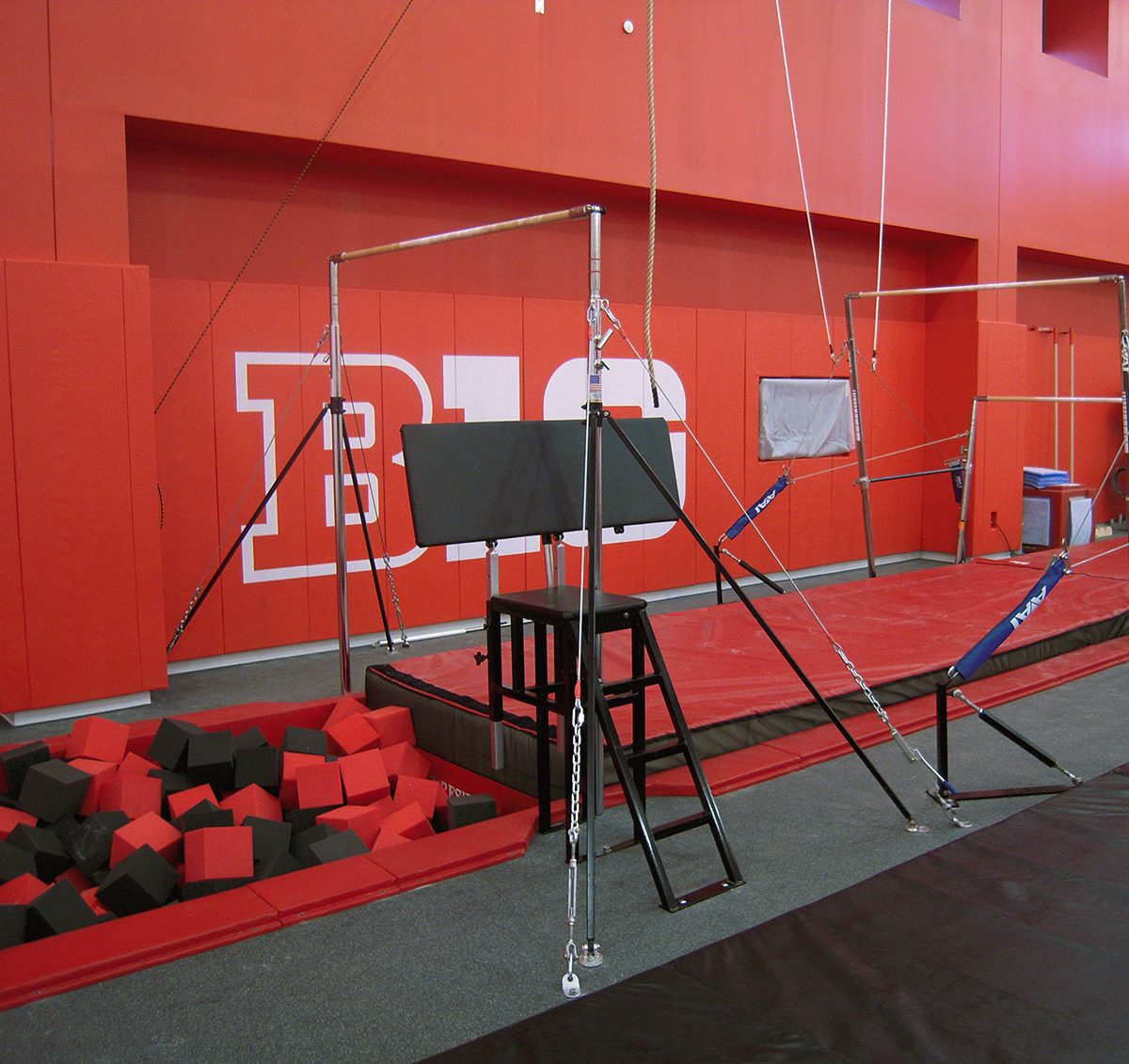 The high bar also has a custom made spotting platform to fit with the edge padding and underneath the cables and diagonal braces. 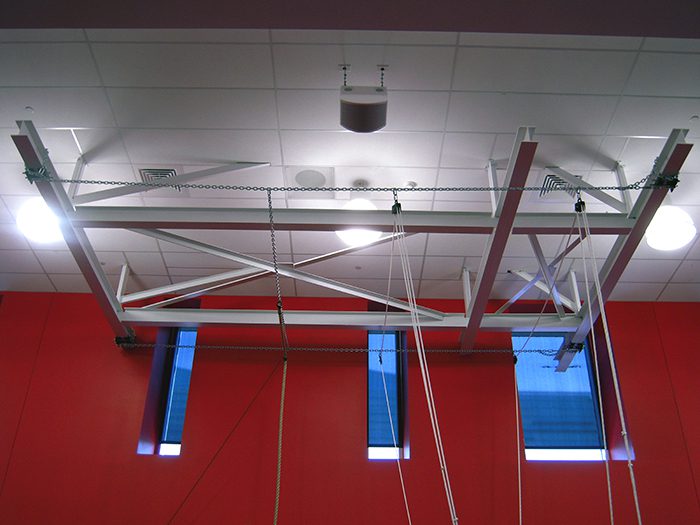 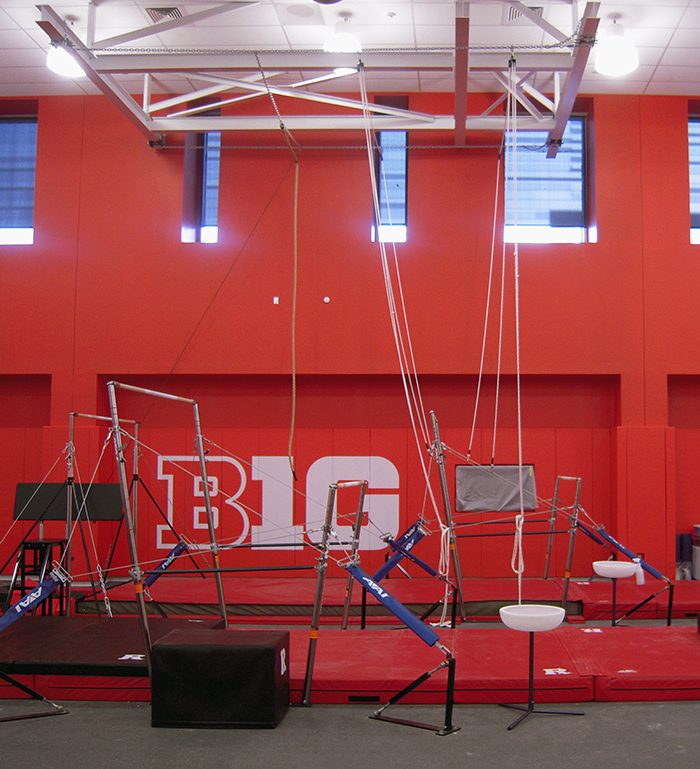 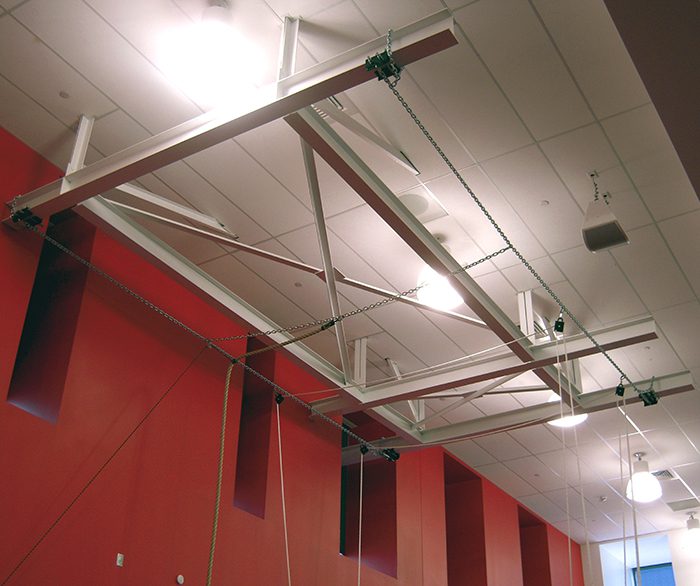 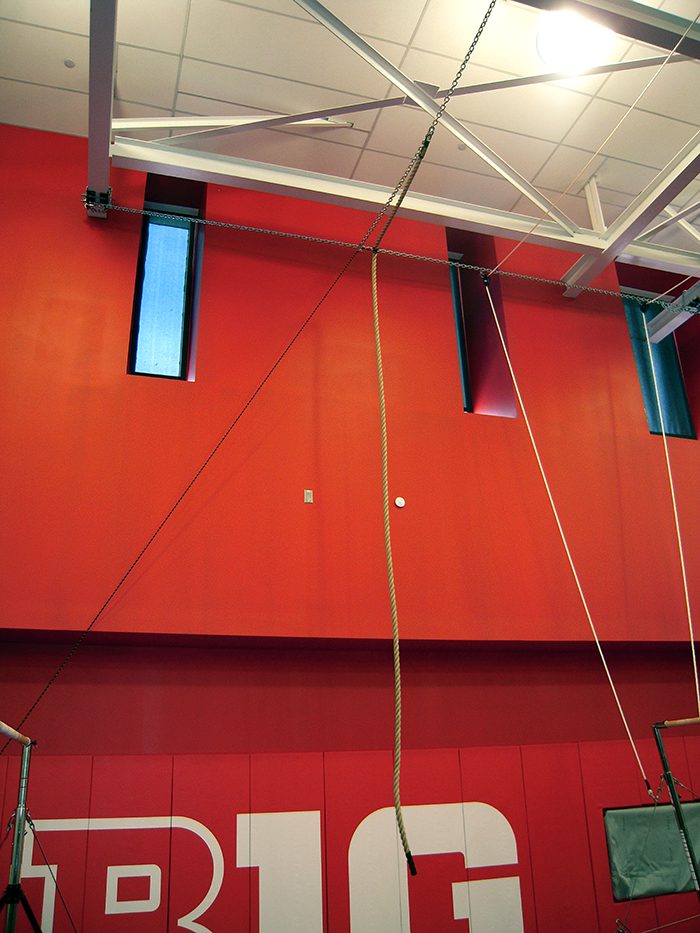 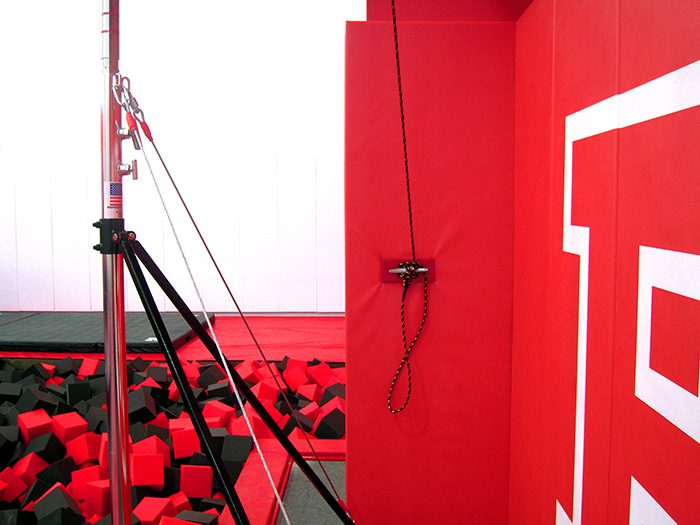 We also ran a climbing rope that centered over the resi mat between the high bar and uneven bars. Typically, having a rope centered over a resi mat that is used for dismounts would cause a problem. But we designed the line to be pulled off to the side with a small rope and pulley system. It tied off on the wall to the side of the pit. 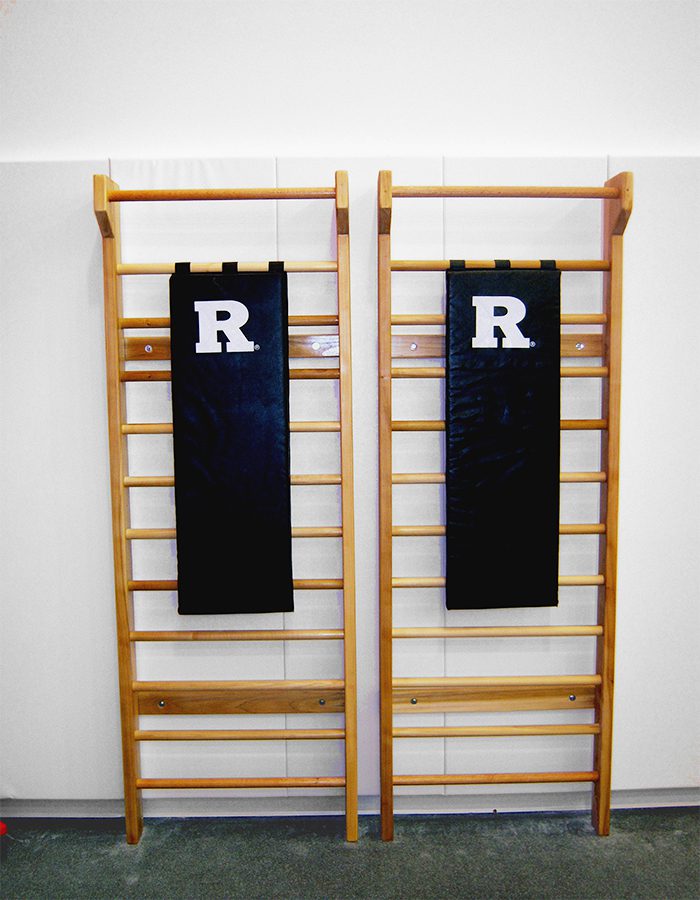 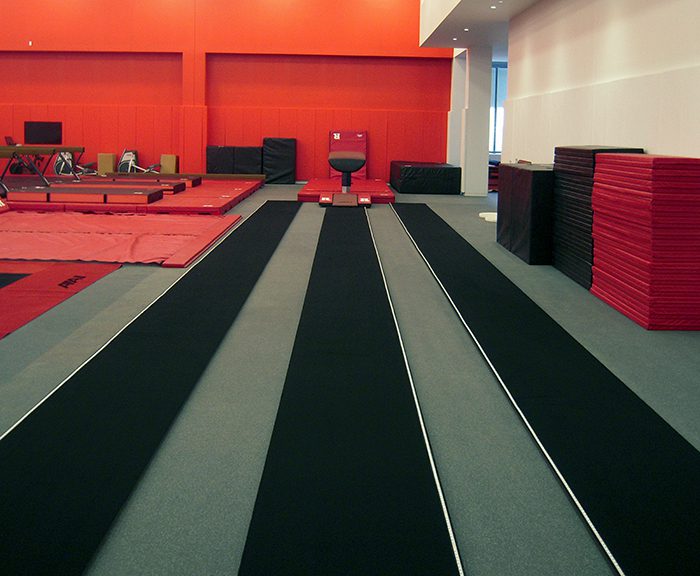 The vaulting area consists of (3) vault tables. Above is the hard landing vault. This area features am 18′ long 20cm landing mat. 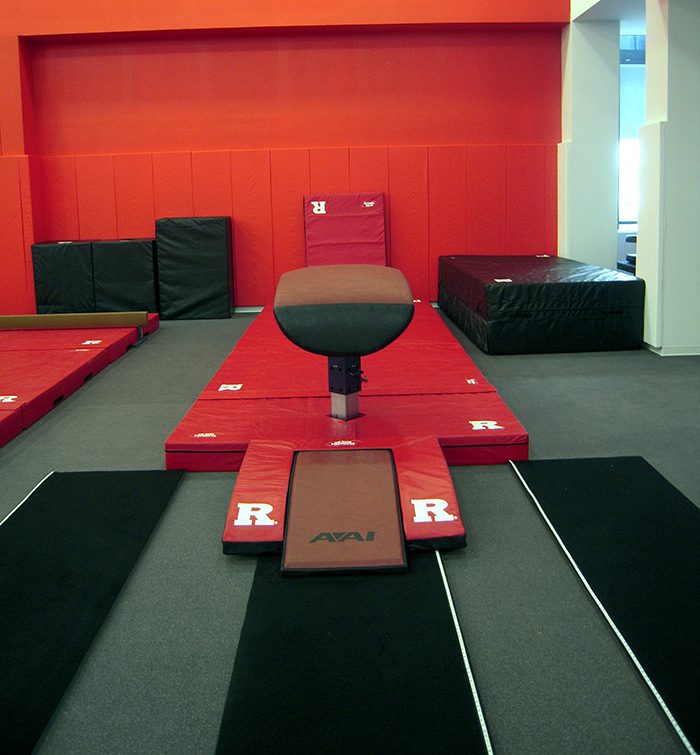 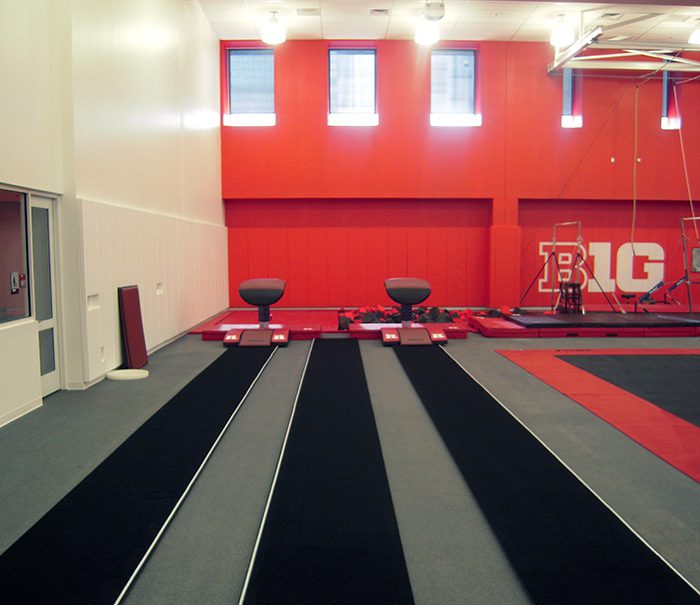 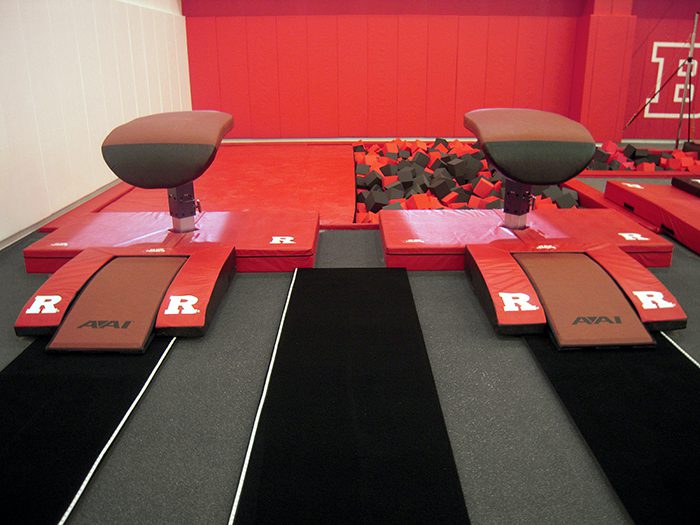 The other (2) vaulting tables go into a resi pit and a deep foam pit. All the vaulting tables have been anchored into the concrete so they cannot shift. We also made custom vaulting board safety zones in Rutgers colors with their Logo. 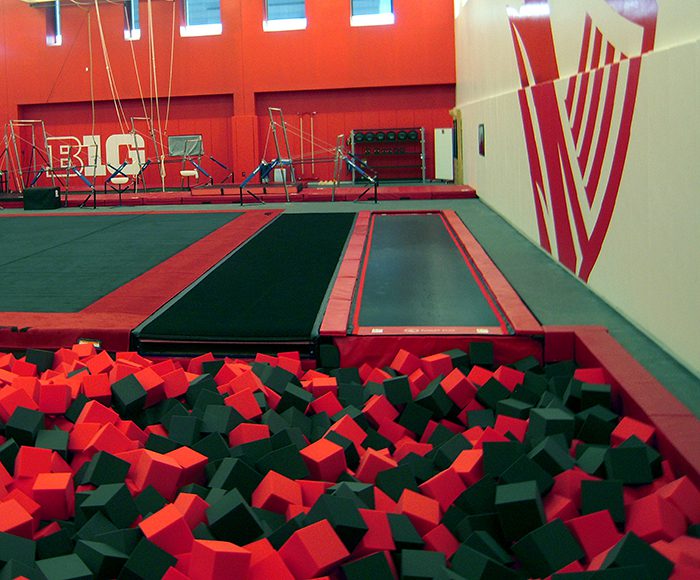 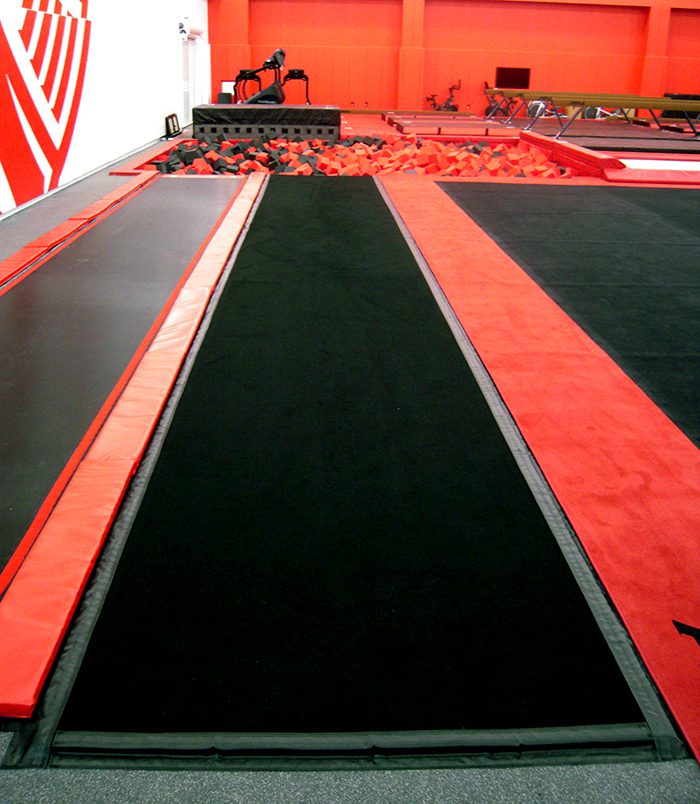 Prices on the website may be inaccurate due to the supply problems and rate at which prices change from our suppliers. Dismiss